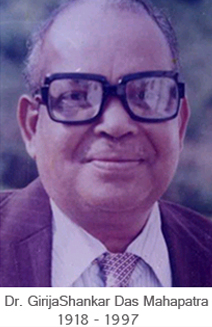 Dr. Mohapatra had his undergraduate Medical Education at the Prince of Wales Medical College, Patna, Bihar and passed MBBS securing the 1stposition in the Patna university in 1942. He also completed the Masters in Surgery from the same institution and University in 1945. He then went to United Kingdom for further training and became a Fellow of the Royal College of Surgeons of Edinburgh in 1947.

Dr. Mohapatra, joined SCB Medical College, Cuttack,Orissa in 1946 as Assistant Professor of Surgery and over a period of time elevated to the rank of Professor and then as Head of Department of Surgery. He worked as Principal of SCBMedical College, Cuttack, Orissa and finally retired from Government Service as Director of Medical Education of Odisha.

Dr. Mohapatra was a very versatile Surgeon, an outstanding Teacher of Surgery, an able administratorwith Foresight, a lovable person, a Poet, a Writer, a Social Worker, Lover of Nature and above all a good Human being.

His black-board drawings while teaching surgery to students were superb and lively.

He was a life member of The Association of Surgeons of India and played a decisive role in formation of The ASI ,Odisha Chapter. He was the Organizing Ohairman of ASICON 1994 held at Cuttack
In consideration of his tremendous contribution to the growth of surgery in this country and in recognition of his academic excellence, The ASI instituted an Oration in his name in the year 1996.