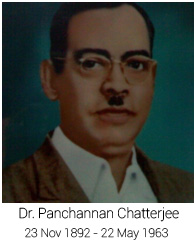 Dr. Panchannan Chatterjee was born on 23 Nov 1892 in Bally, District Howrah, a township situated on the Hooghly, opposite the city of Calcutta. His father Sri Kedarnath Chatterjee was employed at the Post & Telegraph Department of Government of India. Dr. Panchannan had his schooling in Gauhati, Assam and later in Rivers Thomson School, Bally (Now Santiram Vidyalaya). After passing the Entrance Examination of the University of Calcutta he joined Uttarpara Raj College and passed the F.A. of the Calcutta University. Although he was a student of Arts, he was admitted in Calcutta Medical College in 1912 as a special case. He secured all the College prizes of Surgery and passed M.B. of the Calcutta University in 1918 securing the highest marks in surgery. Dr. Panchannan then worked a Senior House Surgeon to Col. Bird, who was the Professor of Surgery of Calcutta Medical College, and performed as an Anaesthetist for a short while.

Dr. Panchannan was later appointed a Senior Visiting Surgeon in the Calcutta Medical College in 1928 and served in the Calcutta Medical College continuously first in this capacity and then as Professor of Clinical & Operative surgery and from 1947 as Professor of Surgery. He retired in 1952 but continued his surgical practice and functioned as a friend, philosopher and guide to a host of younger surgeons until his last days.Dr. Panchannan was a versatile surgeon who practiced a wide range of Surgeries including cleft palate and lip surgeries in 50’s and 60’s in India.

Dr. Panchannan Chatterjee Endowment Lecture was started by the Association of Surgeons of India in the revered memory of one of its Founder Members and Past President in 1983.