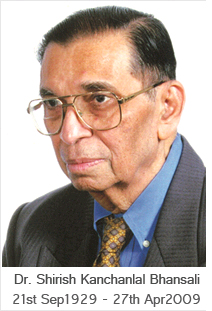 Dr. Shirish K Bhansali was born on 21st September 1929 to Dr KanchanlalBhansali, a General Medical Practitioner and Mrs KumudVakil. His uncle was an illustrious practising gynaecologist in Mumbai. Dr Bhansaliwas educated at Modern School and Elphinstone College, Bombay from where he won a Merit Scholarship to the Royal Institute of Science, Bombay in 1947. His medical education was from King Edward Vii Memorial Hospital and the Seth GordhandasSunderdas Medical College, Bombat from where he won 16 gold medals and many prizes, K.N Bahadurji scholarship for Surgery 1952 and the G.W Kane Gold Medal in Surgery in 1953. Holding posts of House Surgeon at KEM and later moving to Tata Memorial Hospital as Registrar, he completed his Masters in Surgery in 1957.

Dr. Bhansali went to the United Kingdom, worked at Royal Marsden Hospital where he was much influenced by Mr Michael Harmer and Mr David Wallace. He passed the Fellowship Examination of Royal College of Surgeons England in 1958.

On his return from UK in 1960, Dr. Bhansali joined Tata Memorial Centre, Mumbai as Assistant Surgeon. Two years later he also started working at Bhatia Hospital as Hon. Surgeon. After working for seven years in the field of Surgical Oncology, he joined Topiwala National Medical College & BYL Nair Charitable Hospital in 1966 as well as Sir Hurkishandas Nurrottum das Hospital as an honorary assistant Professor. Teaching was his passion all along and he was awarded the best teacher prize by the Alumni Association of T. N. Medical College and by the Association of Surgeons of India. In 1980, he became the Director of the Department of General and Gastrointestinal Surgery and Research centre at Jaslok Hospital and also the Consultant at Breach Candy Hospital at Bombay.

Though Dr. Bhansali was a truly a General Surgeon, his particular interest was in Hepaticopancreatic biliary, critical care and endocrine surgery. He had been extensively published and brought out a monograph on thyroid surgery and has contributed chapters to many books. He had been on the panel of Editors for In the year 2000, he was awarded a scroll of honour by Indian Association of Surgical Oncology for “Distinguished Service in the field of Oncology”, at the hands of the then Prime Minister Hon’ble Atal Bihari Vajpayee.

He was also awarded a scroll of honor by “Foundation for Endocrine Surgery Training and Advancement” for his contribution to overall development of Surgical Endocrinology in India.many Scientific publications.

Above all he was a gentle and kind-hearted Surgeon, who kept patients’ interests above everything else, especially the poor and downtrodden. He devoted all his life to ‘Surgery’.

This Doyen of Indian Surgery breathed his last on 27th April 2009.