Founder President The Association of Surgeons of India 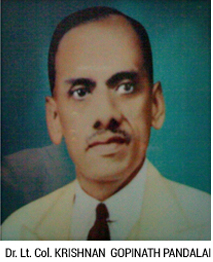 Lt. Col. Krishnan Gopinath Pandalai was born on May 20, 1885 at Mavelikkara in the erstwhile Princely State of Travancore in Kerala. He was born to Lakshmi Pandalai and Raja Raja Varma Thampuran of the Royal Family of Mavelikkara. Dr. Pandalai had his early education in the High School at Mavelikkara and later moved to Trivandrum for his collegiate Education. He then joined the Madras Medical College and took his MB, BCh in 1909, distinguishing himself as one of the Most Promising student. He later went to England and joined the Middlesex Hospital, took the conjoint diploma of M.R.C.S and L.R.C.P., and entered the Indian Medical Service by open competitive examination in 1911. He saw active service in the 1st World War and was stationed in Aden and East Africa. In 1918, he left for England again and qualified for the F.R.C.S. On his return from UK he was posted to the Military Hospital, currently known as Air Force Command Hospital at Bangalore.

It was in 1920 that he was transferred to the civil side of the service and posted to Madras, being the first Indian I.M.S officer to serve at the Madras General Hospital and with conjoint duties of a Professor in the Madras Medical Col1ege. He was the first and only Indian Officer in the IMS cadre among his colleagues of British Origin and needless to say had to face many impediments typical of pre-independence colonial British rule. In the beginning he was posted as Professor of Natural Science and the Third Surgeon there. Later he was re-designated as Professor of Operative Surgery, which chair he adorned over five years till his retirement in 1937. He was also the Superintendent of the Government General Hospital, Madras from 1932 to 1937.

Col. Pandalai’s record of service in the Madras State was unique. At a time when practically all the posts influence were in the hands of European I.M.S. Officers, Col. Pandalai had to fight hard to secure a place for Indians, whether they were in the Indian Medical Service or in the Provincial Medical Service. A large number of beneficial schemes were introduced by the Government acting under his advice in the Madras Medical College and the General Hospital.

As a surgeon, Col. Pandalai made a mark in the profession, calm and collected, meticulous in his technique, it was delightful to watch him performing many operations, more particularly operations on the stomach, gall-bladder, thyroid, kidneys, etc. The reputation that the Madras General Hospital earned as one of the largest centers for gastric surgery was largely due to his skill and the technique that he adopted and the training that he gave to many others. Surgery of the oesophagus fascinated him and he was one of the earliest surgeons to attempt a resection.

After retirement, Col. Pandalai went on a study tour visiting several institutions in Europe and the United States of America.

When the Indian Science Congress was held at Madras in 1927, he was one of the Local Organising Secretaries. It was then he conceived the idea of promoting an All India Association of Surgeons. In 1937, the Madras session of the Indian Medical Association – Annual Conference was held and he was the Chairman of the Reception committee. It was at that time he took the first step to bring into being the Association of Surgeons, thus fulfilling an ambition which he had entertained for a long time. The Association of Surgeons of India was inaugurated, with the co-operation of Surgical Colleagues in Bombay and elsewhere, in October 1938 at Bombay. Col. Pandalai was made the founder President which position he held for two years. Since then, Col. Pandalai was closely associated with the activities of the Association and he attended most of the sessions. The Association of Surgeons had made a name for it and is now a recognized exponent in regard to the policies that ought to be followed by the Surgeons. Its function was strictly limited under his wise leadership to activities in the field of surgical advancement, specialisation, research and Post-graduate studies.

Many were the younger surgeons who came to him to learn his techniques. It was his ambition to create an Indian College of Surgeons and to give guidance in regard to the higher Surgical qualification in the country and to foster a big centre for higher surgical study and research in the country.

The Association of Surgeons of India has borrowed his memory by instituting “The Pandalai Oration” in 1961.