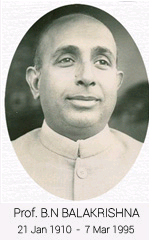 Prof. BASAVAPATTANA NARAYANA BALAKRISHNA RAO was born to Mrs Rukmini and RaoBahadur Dr. NarayanaRao who was a renowned ophthalmologist from Mysore who established the Minto Ophthalmic Hospital at Bangalore which is currently the upgraded Regional Ophthalmology Hospital. Dr. Rao belongs to an illustrious Sankethi Brahmin family from Palghat in Kerala who later migrated to the erstwhile Mysore state.

After his early education at Mysore, Dr. Rao moved to Bombay and graduated in 1933 with 10 medals and 17 scholarships to his credit. He went to the United Kingdom and did his LRCP, MRCS in 1936 and later in 1937 was admitted to the Royal College of Surgeons of England. On his return from UK, he joined the Mysore Health Services and served at many places before joining as a teaching faculty at Mysore Medical College where he was Professor and head of Surgery from 1945-47. He had special interest in Neurosurgery. He also had done pioneering research in renal stones.

Dr. B.N. Balakrishna Rao moved to Gwalior as Professor and Head of Surgery at G.R. Medical College in 1947 and rose to occupy the Chair of the Dean in 1964. Later when All India Institute of Medical Sciences was founded Dr. Rao was invited to become the Head of Surgery and Emeritus Professor, a position which he occupied from 1964 to 1972. He also served AIIMS as its superintendent for two years from 1970-72. He occupied the Chair of Emeritus Scientist of ICMR from 1972-75.

Dr. Rao was awarded Padmashri in 1973 and was Honorary Surgeon to the President of India for many years. Dr. Rao held many key positions in various academic bodies, Universities.

Dr. Balakrishna Rao is founder member of the Association of Surgeons of India and was its President in 1960-62. He was conferred the Hon. Membership of the International College of Surgeons in 1993, the highest Honour of the Organisation. Dr. Rao was every inch a surgeon- full of knowledge, quick in decisions with a masterly operating craftsmanship and above all an able administrator.

An ardent fan of Cricket, passed away silently on 7th March 1995 while watching a game of Cricket. To commemorate his contributions to the art and science of Surgery, a galaxy of his eminent students started an endowment in 2000.