BRIEF About The Procedure

All types of complex fistula-in-ano

2. Curettage of tracts- All the tracts were thoroughly curetted and debrided of their lining with a curette.

3. Emptying regularly of fistula tracts- The curetted tracts were kept clean and empty of any serous fluid so as to ensure that the tracts healed (close) by granulation tissue. Keeping all the tracts clean till they healed completely was a challenging task and the most demanding step of the procedure. It took 4 to 8 weeks (occasionally even longer) for all the tracts to heal fully. Till that time, regular cleaning of the tracts was done.

To ensure proper cleaning of the tracts, the following steps (one or multiple depending upon the requirement and fistula characteristics) could be done in a patient

A. Multiple holes were made along the straight or the horseshoe tract in such a way that the farthest corner of the tract could be cleaned with ease.

B. The external opening was widened and the scarred puckered skin (if present) was excised. The aim was to make the opening bigger than 1 x 1 cms. This facilitated cleaning of the tracts for a longer duration.

C. Loose rubber setons were inserted in the holes to prevent their premature closure. These were removed 10-12 days after the operation.

A saddle block (spinal anesthesia) or a short general anesthesia was given. The patient was positioned in a lithotomy or a prone jack-knife position. The internal opening was localized. This was facilitated by injecting saline, povidine iodine or hydrogen peroxide through the external opening.

After this, the tracts were curetted in accordance with the MRI diagram and the tract lining was scrapped out as much as possible with a blunt curette. While doing so, a finger was kept in the rectum so as to ensure that the curette didn’t accidentally perforate the rectum.

The cleaning process entailed cleaning the cauterized wound in the anal canal and regular cleaning and emptying of the curetted tracts. The former was done by gentle rubbing of the wound by doing a per rectal finger insertion. The latter was done by a cotton swab mounted on an artery forceps. No povidine iodine, hydrogen peroxide or any liquid was injected in the tract during the cleaning process as this would have prevented the internal opening from closing. The cleaning was done by a trained nurse, a medical attendant or a relative. In our setting, teaching a relative was an economical and a preferred option.

Perfact procedure is a new effective method for complex fistula-in-ano, effective even in fistulas with supralevator extension, internal opening not localizable and fistula associated with abscess. 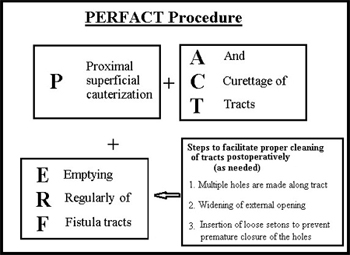 Figure-2: Preoperative MRI of Perianal region & its Schematic diagram showing a recureent horseshoe abscess & fistula from 2 to 10 o’clock position in a 29 yr old female patient. There was no external opening and the internal opening was at posterior midline. 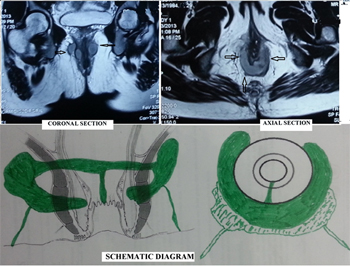 Figure-3: Management of a 29 yr old female patient by Perfact procedure having a horseshoe abscess and fistula from 2 to 10 o’clock. There was no external opening and the internal opening was at posterior midline. The right bottom picture shows complete healing of the fistula (MRI & diagram of this patient shown in Figure 2) 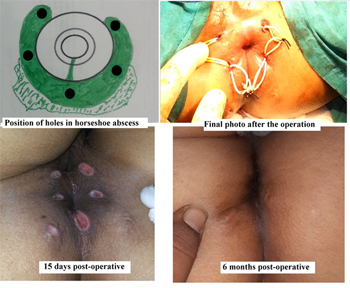 This procedure has been presented as

Accepted for publication in World Journal of Gastroenterology

Details of admin View all posts by admin